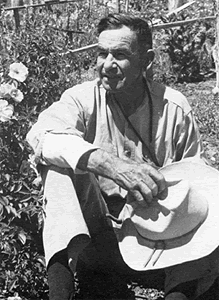 During his lifetime, South Dakota cattle rancher Claude A. Barr attained international acclaim as an eminent plantsman of the plains. Through his Prairie Gem Ranch, he supplied Great Plains seeds, plants, and information to the scientific and gardening world for many years. His achievements inspired formation of the Great Plains Native Plant Society in 1984.

Shown here with his double wild rose, the rare mutation of Rosa arkansana that he found and marketed as the "Fargo Rose", Barr received many awards from numerous horticultural and scientific organizations for his various plant discoveries.

Barr's lifework is depicted in his posthumously published book "Jewels of the Plains" which is yet to this day the best reference to the plains wildflowers and their cultivation. With its original photographs, the hardback edition of "Jewels of the Plains" is now out of print, and the few remaining are available only as a special premium with purchase of a Life Membership in the Great Plains Native Plant Society.